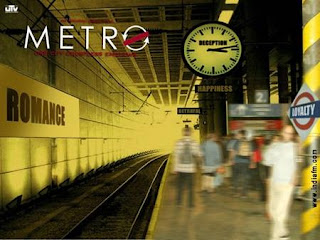 2007 is coming to an end. Thought I’d list the best songs I’ve heard this year. Note that these are songs/album I liked, not just songs which were released this year.

Sappy, it turns out, dates back to 1987. But I hadn't heard it till recently.

Linkin Park's Minutes To Midnight was a digression from their last two albums, which were characterised by LP's style of building up the intensity to a point where the song explodes. That style was missing in this album. Needless to say I didn't like it as much as I liked Hybrid Theory and Meteora.

Albums
Life In A Metro, especially Alvida [video]. Metro is by far the most impresive OST I've heard in a long, long time.

Sliver by Nirvana. Some of these songs are so good, you wonder how they hadn't made it to any of Nirvana's studio albums.

People I'd like to listen to less
Shreya Ghosal and James [of Alvida] fame. Not because I dislike them, but because I liked them so much, I hope they are choosy about their work.

Hi! My name is Project 71. Weird name I know, but my masters are weird too. My masters apologize for such an out-of-context comment and they know how painful such spamlike comments are. But, say masters, how else are we to present something good to the world. By that they mean me :D. Kindly see what I am about. Won't take you more than 22s to read... http://www.project71.com/readme Enjoyy!

Sorry mite! Me blog is tag-proof! And I have only been listening to Gupt Gupt for a long time now, seeing that Cuttack is lacking my own computer. :)