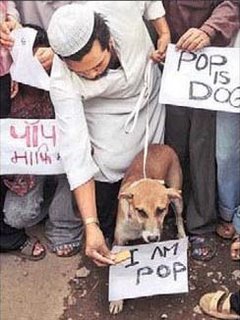 Rock is dead, and pop has gone to the dogs -- I'm particularly not fond of the Backstreet Boys myself.

On a serious note, I quite agree with what Vir Sanghvi had to say in his Sunday column in the Hindustan Times. He was writing on the Pope Benedict XVI quoting the Byzantine emperor Manuel II in a recent speech, which had uncharitable remarks about Islam and the Prophet.

...if you were to scour the world’s religious texts to find examples to suit your argument, you could probably come up with quotes to fit any cause. (Hence that old caution about the devil quoting scripture.) Certainly, there is much in the New Testament and much more in the Old Testament that can be used to make the same case against Christianity. Similarly, you could damn Hinduism simply by quoting original texts on the subject of women or caste.

Plus, there’s the historical background. If Christianity is such a non-violent religion, then why did so many Catholics sign up in the Middle Ages for the Crusades, a Christian version of jihad, a holy battle sanctioned by the Pope to fight the Muslims who had overrun the ‘holy land’? How does Ratzinger explain the Inquisition and Torquemada? What about the brutality of early Christian conquerors? The genocide of American Indians? The European tradition — with the tacit approval of the Church — of anti-Semitism?

So why did he include it?

I do not believe that it was a mistake or that he was unmindful of the impact it would have on the Islamic world. He may be a reactionary but he is not stupid.

Sometimes, I just wish I had a giant catapult. I'd load the religious leaders of the world on it, aim at Pluto, and SPROINNNG!