Posted in Cricket
As Mitchell Johnson and Stuart Clark hammered India’s bowlers, I was taking out my frustration by gnashing morsels of lunch with my extended family. Will these two buggers do the unthinkable? The tension spoilt the taste of the delicious sambhar-rice, curd, carrot pickles and mushrooms.

"Turn the TV off" said Shyam, our young domestic help. "When you switch it back on, Australia would have lost."

We laughed off the suggestion. And almost as if providence had listened to Shyam, the power went off.

"Turn on the radio," I shouted to Shyam. There was no way we could miss the action. And as soon as he did, we heard Sushil Doshi scream, "Aur yeh out!"

It was the wicket we had waited for what seemed an eternity. It was the wicket that would make ensure India a win in Perth. Shyam was right: in its own mysterious way, turning off the TV helped.

And then, the very next instant, the power was back, almost as if to prove we should have listened to Shyam in the first place. 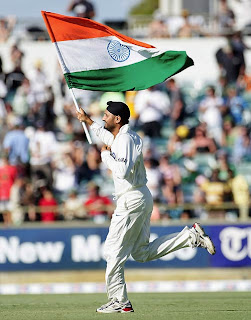 I could think of a lot of wins that would match this one. Kolkata was delicious in build-up, explosive in finish, and mind-boggling considering India's odds. But it still was on home-turf, and some umpiring decisions went our way.

Sabina Park (2006) was on a minefield of a wicket but India were a far superior side in the series, and West Indies were lucky not to lose 0-3. Similarly, India won 1-0 in the West Indies in 1971, but like Sunil Gavaskar himself said on air today, the momentum was with India, and West Indies were not at the peak of their powers.

Johannesburg was phenomenal and hard-earned but against a vastly beatable side.

Adelaide was ground-breaking, almost unthinkable at the time but Australia were vulnerable without McGrath and Warne. Something similar could be said about The Oval win of 1971, when nobody in their right minds would have bet on India.

Leeds saw a gallant India, taking in the bullets and then shooting England down. But it was also possibly the strongest Indian side to tour England.

Coming back to Perth, the opposition was on a 16-match winning streak. India were trailing 0-2 and the bouncy pitch wasn't expected to be to India's liking. I, for one, thought India would be 0-3 down after Perth.

Then, there was all the negativity surrounding the Sydney Test. Our best fast bowler --- Zaheer Khan --- was also injured.

From that position, to beat the top-ranked side in the world is something to be immensely proud of.