Remember remember, the fifth of November... 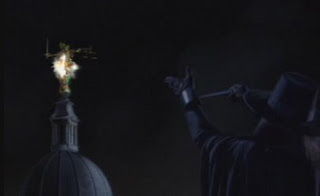 Today is the fifth of November.

I remember to remember the day because of that wonderful film, V For Vendetta. The film, based on the comic book, centres around a masked crusader called 'V', who takes on a totalitarian regime in England.

There's this scene [picture above] at the beginning of the movie where V blows up a prominent building in London on November 5. It marks the beginning of his war against the oppressive government.

V's reasoning: the building is a symbol; people make symbols powerful. And when a symbol becomes more powerful than people, the symbol must be gotten rid of.

As a kid, I remember wishing something tragic may happen to my school building so that I do not have to go there again. Today, it cracked me up thinking the same way about my office building. Not that I hate my work but there's something about huge buildings and whatever they pretend to stand for that sometimes gets my goat.

Coming back to the film, I've seen it six times already and I liked it more each time. If you value freedom of expression, if you think the we've had enough conflict over silly symbols, then it's a film you cannot miss.

I actually wished I had a bazooka so I could blow the damn thing down. :x